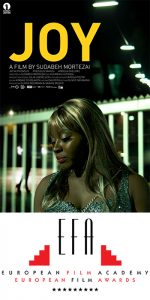 We are very pleased that after the successful worldwide release of Sudabeh Mortezai ‘s film JOY on Netflix the award-winning feature film was selected as the Austrian nominee for the
Best Foreign Film at the 92. Academy Awards on February 9th 2020!