A dropout who has turned his back on his previous life and his expectations in order to make a new start. A young man in Vienna who is bringing up a child although he isn’t sure he is really the father – and can’t forget his former love. An unhappy eight-year-old boy who dreams himself into a fantasy world and comes to grief because of his big sister. A deeply unhappy children’s book.

A crippled singer in a death metal band who can hardly walk but has a sports car and model girlfriends. A huge, destructive giant who hides from the world in a forest. A man who never grows up and is confronted by the same mistakes he makes again and again. A 90-year-old professor of engineering who remembers his previous lives hundreds of years ago. A young woman whose father disappears; she tracks him down only to discover that he has constructed a new life where everything seems to function in exactly the same way… except that she doesn’t exist in it.

All these narrative strands are told from different perspectives by a mysterious, sad young heroine who is repeatedly transformed by the gaze of others into a new person. 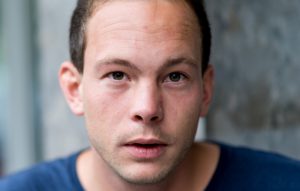 Florian Pochlatko is an Austrian Filmmaker and works in the field of film directing, script, editing and operator.
Grew up in Graz, studied film directing in the Film Academy in Vienna, attended Michael Haneke’s course. Also studied Critical Studies at the Academy of Fine Arts in Vienna in
Diedrich Diederichsen’s course. Received the Bka scholarship in 2016. Shot music clips for Zebra Katz, Leila Arab, Königleopold, Wanda and many more.
His works were selected for numerous international film festivals and were awarded
e.g. the Austrian Film Award, Diagonale Prize for the Best Short Film and the Austrian Prize for the Best Music Clip.
FILMOGRAPHY (SELECTION)
2016 – Der Himmel über Wien (Lemo) – Music Clip